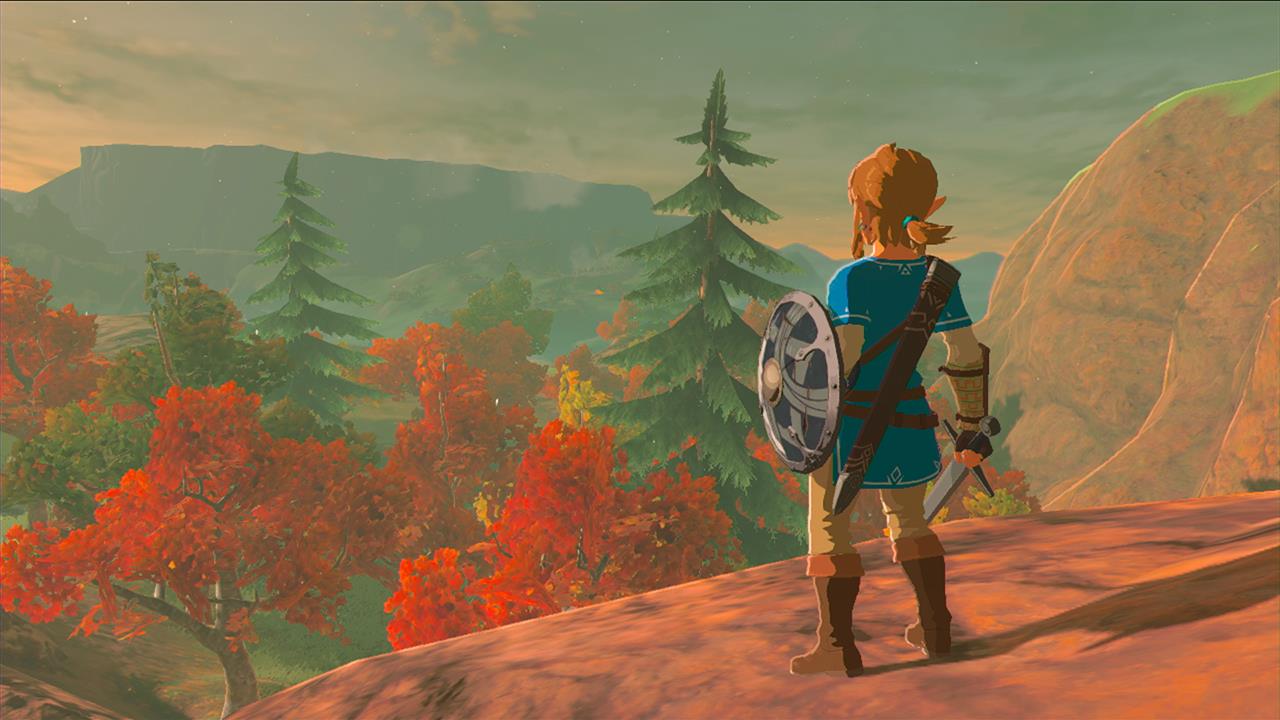 The Musical Narratives in Breath of the Wild

BotW's music has been described as "simplistic."

But is there more to it than we may initially hear? Wesley Bradford, an OU Alumnus and music theorist, seems to think so.

The Legend of Zelda is one of my all-time favorite franchises, and one of my favorite aspects of its games is the soundtrack. Music has always been an active part of Zelda’s gameplay. Musical elements can even be seen in game mechanics such as an ocarina, a music baton, and other similar items.

However, The Legend of Zelda: Breath of the Wild varies significantly from previous titles. The game’s music has often been described as “simplistic,” and fans even expressed disappointment in the soundtrack. Many of Hyrule’s uninhabited areas are only accompanied by a solo piano or, in many cases, natural noises. Other games in the Zelda Legend series use bombastic themes that are well-known in almost every installment of the series. How do we make sense of this shift in the Zelda series?

Wesley Bradford is a music theorist and alumnus of the University of Oklahoma who is interested in the creative history of games. Indeed, Bradford concludes that Breath of the Wild makes less overt use of music elements and departs from previous installments by immersing the player to a sound world that directs the game’s main story.

Prior to Breath of the Wild, other music researchers wrote about the music in the Zelda series. Elizabeth Medina-Gray highlights significant impacts on player experience in The Wind Waker as the in-game harp interacts with location-specific music. Steven Reale mapped musical experiences in Ocarina of Time between Link, the franchise’s major protagonist, and the various musical areas of the game where the in-game ocarina is used.

What is Narrative in Music and in Games?

Narrative has been broadly interpreted in a variety of musical studies. Bradford argues that narrative is the driving power of communication, and that everything about communication is found in the narrative. The main storyline reflects the communication between the world and its occupants in games.

The plot in Breath of the Wild is much more complicated than linear storylines seen in previous installments of the series. For example, only by searching through a list of memories will players be able to view the scenes of Ganon’s rise in Hyrule. Breath of the Wild also blurs the line between main story and side quests, allowing players to choose their own direction through the game. The unique sequence of side quests and events will also depend on the path player chooses to take, which builds onto the main memory-based storyline.

The different missions, characters, and antagonists transform and personalize the plot for each player. So, all of these aspects convey a different musical sensibility. Music brings all these pieces together while serving different functions in the “musical narrative”. To group the different types of music and their functions in the game, the author used “archetypes,” a subgroup concept in the musical narrative, within a classification of “mechanistic” and “nature” aesthetics in the soundtrack.

Within the various kinds of sounds in Breath of the Wild, Bradford uses three musical archetypes to support the idea that music serves different purposes in the main story.

Technology vs Nature: Two Musical Topics in Breath of the Wild.

According to Bradford, the innovative storyline of Breath of the Wild combines a distinct musical style that narrates the game by sound. Although several games use music to enhance the immersive experience, Breath of the Wild delves into musical storytelling. Bradford divided the music into two contrasting musical themes that are central to the storyline of the game. First, the game’s “mechanistic topic,” which is linked to ancient technology and futuristic elements; and, second, the “nature topic,” referring to the living creatures and ecology of Hyrule, the game’s open-world. Players navigate the game’s narrative by linking environments, people, and incidents through music and dialogue, interacting with sound that conveys either the mechanistic or natural topics.

The mechanistic emerges as a key aspect directly linked to one of the game’s core tenets: technology can be an inherently dangerous instrument that is corruptible, but it can support living beings when used responsibly.

The “ancient technology” musically evokes both the past and the present, as these relics are remarkably excellent technological successes despite their antiquity. The mechanical topic is music that involves nervous frequencies, distorted artificial or synthetic sounds, ambiguous pitches, twisting tones and engine noises.

The most adversary form of this musical topic is in the music associated with the Guardian, which symbolizes the corruption of modernity and the dangers of experimenting with technology for war. A less threatening music in the Mechanistic category can be heard in the Shrines, aligning with the Mythic archetype described earlier. The raspy tone of the pipes sounds legendary in the ancient and mystical atmosphere of Shrines.

Four Divine Beasts provide larger dunges than Shrines. These beasts were built to protect Hyrule from Calamity Ganon, which were corrupted and turned against the people who created them. Acoustic and synthesis sounds are used to evoke thematically identical music for the four Divine Beasts, but each of the four has their own distinct auditory aspects. For example, Vah Naboris features sounds of static electric machines within a deserted atmosphere. The ambiance changes as Link remembers each of the Beasts’ four former owners, the champions. But these are just some of the examples that Bradford explores as part of a mechanistic aesthetic.

The Guardian Battle theme is some of the anxiety-inducing music in the game, especially when the player begins to associate it with the highly-lethal enemy.

The nature is associated with the surrounding people of Hyrule as well as the wildlife in the game. This music usually contains memorable themes, simple sounds, and the use and emphasis of harmony. Folk or common instrumentation are common to this music.

But the nature topic can identify a variety of musical characteristics and expressive meanings beyond the typical subjects and scenarios. This music often imagines naturalness as a simplicity that urban life has forgotten. Simplicity in instrumentation, melody, harmony, and rhythm dominates the music associated with rural communities in the game, while nature themes symbolize a connection between those communities and wildlife.

The most sympathetic version of this music can be heard in the stables of Breath of the Wild. Another important instrument in Breath of the Wild is the Shakuhachi, which is very prominent in the game’s villages. The natural topic is also specific to certain characters or locations, such as the mythical use of natural music at the Deku Forest. Timbre is the musical concept for a clearly recognizable instrumental sound, which is important to music in this natural category.

Stables give a simple, tranquil and acoustic ambiance, contrasting with the mechanistic topic. The music of the stables also features the Ocarina, a beloved instrument among Zelda fans.

Other Kinds of Musical Topics in Breath of the Wild

Because of the wide range of musical timbres and atmospheres in Breath of the Wild, not all of the music falls neatly into Naturalistic or Mechanistic topical considerations.

Bradford’s sense of tension between mechanical and natural themes is muddled by musical borrowings from previous games. For example, when Link mounts his horse, a quiet piano accompaniment begins, alluding to the modern subject. The game then progresses to “Zelda’s Lullaby” during the day and “Hyrule Field” at night. Both songs contrast stark piano notes with the ghostly sounds of string instruments, more closely related to the people and wildlife evoked by the nature theme.

Bradford also notices a fusion of modern and pastoral music in the Hateno Ancient Tech Lab, which combines distinct instrumental timbres with electronic music. The author explains this blending as representing Purah and Symin, the lab owners, and their knowledge of ancient technology despite being villagers. The music of Hyrule Castle, on the other hand, contains the most explicit combination of these topics. While being the epicenter of Ganon’s wrath, Hyrule was also home to the Royal family and is inexorably tied to Link’s heroic spirit.

Do you agree with Wesley Bradford’s thoughts about the music in The Legend of Zelda: Breath of the Wild?

Bradford suggests that thinking about various musical topics in video games and other interactive media is an impactful factor in producing more engaging experiences for the audience. While we wait for the sequel to this amazing game, I will be paying close attention to the soundtrack of Breath of the Wild, experiencing what the music has to say about such an enthralling adventure.

UPDATED: A Day Off Twitch, Twitch Files Against Raiders

On September 1st, Streamers took a stand against Twitch, the popular streaming platform, as they grappled with hate raids. Twitch Streamer SwiftIke plays Mario64 Hate raids occur when people create accounts en masse, and then use these accounts to spout hateful things at creators, specifically minority and LGBT creators. They…

The third and final Valorant Masters event of the 2021 season is assuredly upon us, set to take place September 10-19th at the Verti Music Hall in Berlin, Germany. As the last major tournament before the global finale of the 2021 Valorant Champions tours, Masters Berlin will feature 15 teams…