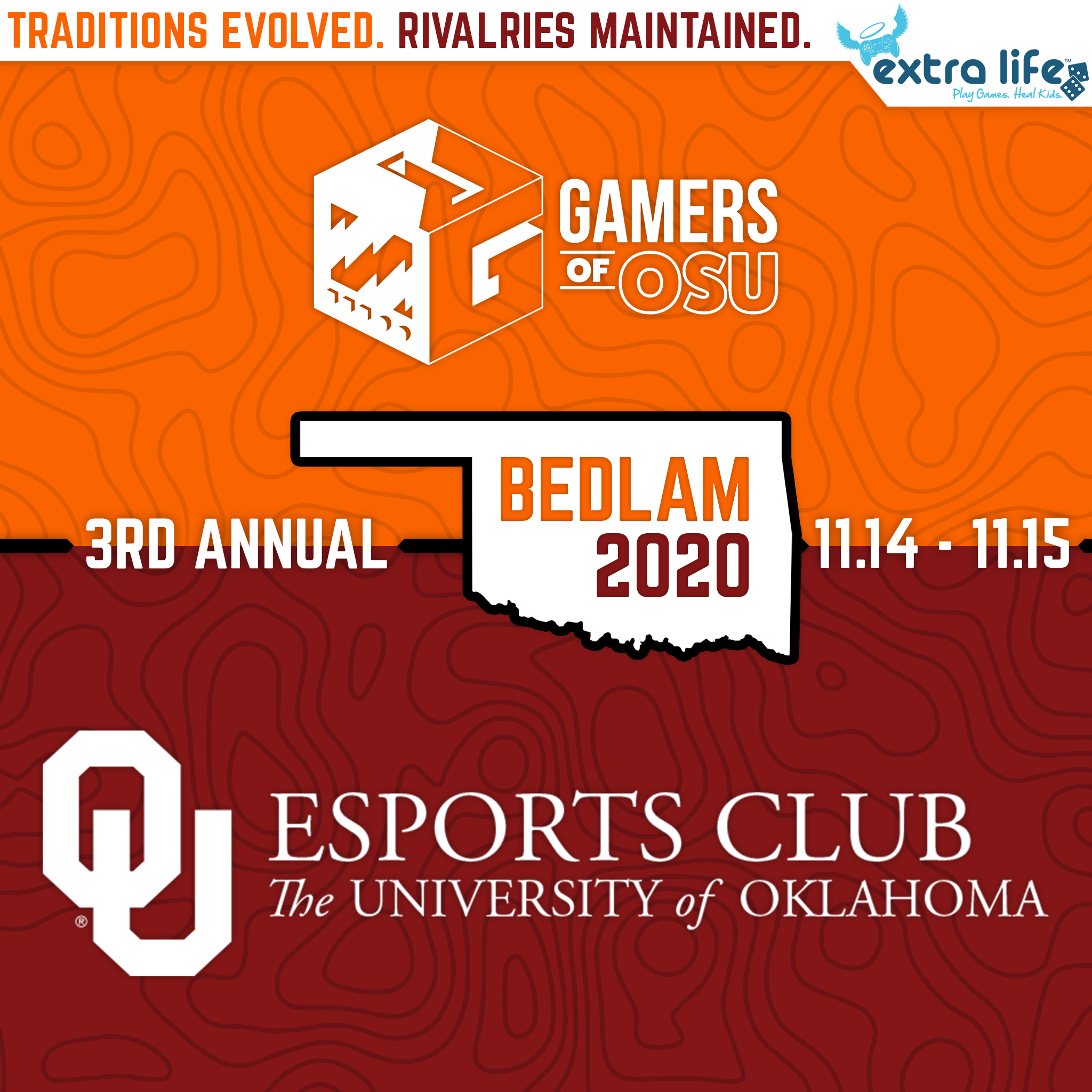 Following on the heels of OUTX,

The weekend of November 15, two fierce rivals, the University of Oklahoma Esports Club and the Gamers of OSU maintained long-standing traditions by facing off head to head once again in the 2020 (remote) edition of Bedlam.

This third-annual event saw panels and games of various subjects hosted across the Twitch page’s of OU Esports and gOSU. After losing the last Ebedlam, and striking even in the first, gOSU pulled off their first Ebedlam win this year. Saturday saw the two schools face off in matches of Counter-Strike: Global Offensive, Tom Clancy’s Rainbow Six Siege, and Overwatch. The following day held a Rocket League and League of Legends tournament.

The panel on Saturday consisted of members from the student leadership positions of both school teams.

In the panel, Aguilar provided several great questions that served as talking points for both schools. Director Aguilar, for instance, asked OSU’s Esports Coordinator Matthew Fontenot what the “significance of esports focused Bedlam rivalry for you and Gamers of OSU”?

”It is a very significant event for both of our schools, especially ours... where we want to push for institutional support from our administrators, and having these annual events showcases that we are worth putting investment into. We have people spending days, weeks, months planning these events making sure everything goes smoothly, all of our teams are committing to their practices, it shows the drive and passion behind everyone involved, and how big it was last year… it’s really huge for [the administrators] to see how many people want to get involved in these events

Aguilar proceeds to point out that “When we started in 2016, there was less than 25 institutions supported across the US and Canada, and now, because we’re in 2020, we are over 240 universities. That is not a small growth rate. It is a new edge for universities to compete on.” As Esports continues to be adopted at this rapid rate for the foreseeable future, those at the University of Oklahoma are hopeful to see their friends at Oklahoma State gain institutional support due to the opportunities it will provide.

View the whole panel now on YouTube, or in the embedded video on our site.

In terms of the matches on Saturday, the initial face off in Counter-Strike: Global Offensive saw the OU Esports take map one against Gamers of OSU with several intense and exciting moments. Map 2 saw OU win in a close consisting of two overtimes.

Overwatch saw OU in a great map 1 victory on Illios, with a second victory on King’s Row and their final victory on Nirvana. This is consistent with OU’s Overwatch team’s strong performance, noticed in SEI and last week’s OU vs TX.

Despite this year’s Bedlam being entirely virtual, that has never stopped Esports before, and both schools managed to have a fantastic event that added about 200 to the overall Extra Life total.

Sunday saw another panel with members of each organization coming to discuss what gaming communities mean to them, and how esports organizations have empowered them. It was a very impactful and deep conversation for the members. Mike Aguilar stresses the importance of students finding their communities, and that the esports/gaming realm offers something for everyone — even typically non-gamers.

Each of the panelists had a deeply compelling reason as to what brings them in, and the importance of these communities in their lives. To summarize them wouldn’t do them justice, so we highly encourage you check out the full panel video here or on YouTube.

OU Esports held its End of Year Bash this weekend, celebrating the year’s achievements and allowing students to gather and play games together before dead week.The bash kicked off on Friday night with the Sooner Smash Dojo, a weekly “Super Smash Bros. Ultimate” tournament for OU students and the greater…